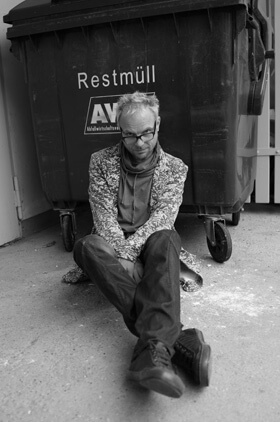 The unorthodox Austrian theater man Karl Sibelius will be shaking things up in the DISKOTEK this summer. If the ice bergs can stand the heat he might bring his fiery alter ego Rose Divine along for the journey.

Karl Sibelius is a director, actor, theater teacher, singer, and since 2012/13, also director of the Theater an der Rott in Eggenfelden, Bavaria.

Sibelius managed to dramatically transform the artistic profile of Theatre an der Rott and after only the first season he was awarded the Jury Prize of the Bavarian Theatre Festival for his work with the theater. The big spirited little theatre in Eggenfeld was also the surprise winner of the German Stage Journal's (Die Deutsche Bühne) critics prize in the category "Most noteworthy Theater Beyond the Centers." After this success Sibelius will from 2015/16 move on to assume the position of General Director at the State Theater of Trier.

The Austrian Karl M. Sibelius already has a long career in the theatre under his belt. He took his initial steps as an actor at the National Theatre in Vienna and at the Theater an der Wien. He also completed vocal studies at the Vienna Conservatory. With major roles such as Shakespeare's Hamlet and the title role in Bertolt Brecht's The Good Person of Szechwan, he was a long time favorite at the State Theatre in Linz, where he was an ensemble member for many years. Guest engagements brought him to stages all over Europe. Sibelius also work as a stage director spans everything from theatre, musical theater, operetta to opera. Among his noteworthy opera productions are Ludwig van Beethoven's Fidelio at the Opera Klosterneuburg. Sibelius directed the 100.000 people opening ceremony for the Linz09 Cultural Capital of Europe. Sibelius is also an active playwright and a lecturer in drama at the Mozarteum University in Salzburg.

For his social and scientific commitment, as well as his artistic work, he has received several awards. He is a graduate of the prestigious arts administration institute (EMAA) of the University of Zürich.